Giannis Antetokounmpo said he is not going to ask for a trade out of Milwaukee this offseason, and he wants to build a dynasty there. The Bucks have no intention of trading their superstar away.

However, this weekend Antetokounmpo unfollowed hundreds of people on social media — including the Bucks’ official accounts and those of all his teammates — which raised a few eyebrows around the league. Then Antetokounmpo sat down with Milwaukee ownership to discuss his future with the team.

The Bucks are committed to building and sustaining a championship roster around Antetokounmpo and are expected to be one of the busiest teams this offseason.

Rival GMs are circling like vultures would be a more accurate description.

There is no word on what was discussed in the meeting, but you can be sure it included the direction of the roster and potential moves. Rumors that the Bucks might trade for Chris Paul have been flying around the league since Milwaukee was eliminated.

The Bucks have said they will offer Antetokounmpo a supermax extension this offseason, which at the expected salary cap level would be five years, $222 million. If he does not sign it he could be on his way to free agency in 2021. It also is possible Antetokounmpo could sign a shorter contract, waiting for the league’s financial issues caused by the coronavirus to fade, and then seeks the security of a longer contract.

Antetokounmpo is about to be a two-time MVP entering his prime; he can essentially choose where he wants to play — every team in the league would do whatever it took to get him. For more than a year now, sources have told NBC Sports that Milwaukee is a heavy favorite to re-sign the Greek Freak, it’s the only home he has known in the United States and now his son is there as well. Milwaukee is still considered the favorite, however, the Bucks’ loss to the Heat may have Antetokounmpo questioning what his next move should be. He has said his goal is to win rings, plural, and he may now be questioning if that can happen in Milwaukee.

The eyes of the NBA world will be on Antetokounmpo — and the speculation will not stop — until he signs his next contract. Wherever that may be. 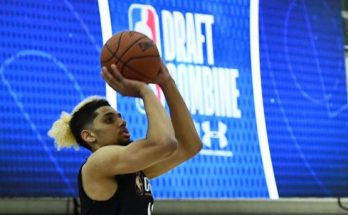