There will be a 2020 NBA Draft Combine, but like so many other things in 2020 it will not look or feel like anything that has come before it.

The idea being floated is players would get medical reviews by a team doctor at a local hospital (info can be shared with other teams), there would be guided on-court work, and the interviews would be virtual. As the process moved forward there would be in-person interviews for teams in the run-up to the draft.

The 2020 NBA Draft is set for Nov. 18. The NBA Draft Lottery already took place, with the Minnesota Timberwolves landing the No. 1 pick.

The NBA Draft Combine is really about the interviews and the measurements — top prospects rarely workout at the combine. That is certainly not changing this year. No in-person workouts can be conducted at first, which tends to hurt guys trying to move into the first round, or into the daft at all. What moves guys up boards is often the interview portion, or when they post a wingspan or vertical leap that turns heads.

That said, teams used the hiatus to do an incredible amount of film study on players — teams are not going to be surprised on draft night. They just want more information to help them make the right pick. 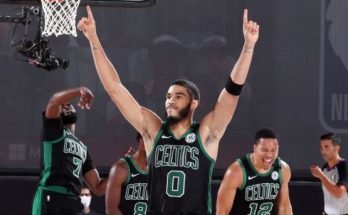 For the first time ever, Patrick McCaw has lost a playoff series